Astrology of the California earthquake

A 6.9 magnitude earthquake has been recorded in Southern California, according to the European Quake Monitor and the USGS. The quake registered near Ridgecrest, California, in the environs of Death Valley National Park, on Friday night. Tremors were reported from Los Angeles to San Diego. The quake initially registered as 7.1 in magnitude and was later revised to 6.9 by the US Geological Survey (USGS).
https://www.rt.com/usa/463493-southern-california-quake-7/

In his book Mundane or National Astrology [1], H.S. Green in the chapter on “Earthquakes” writes:

Earthquakes are found to be associated with eclipses and important planetary conjunctions and oppositions. An eclipse is always liable to cause seismic disturbances where it is visible, especially if it falls very close to the line of horizon i.e. the cusps of the first and seventh houses, or of the meridian i.e. the cusps of the tenth and fourth houses. Of these two lines, that of the meridian is more important; and that of the lower meridian i.e. the cusp of the fourth house is the most important of all. H.S.Green, Mundane or National Astrology 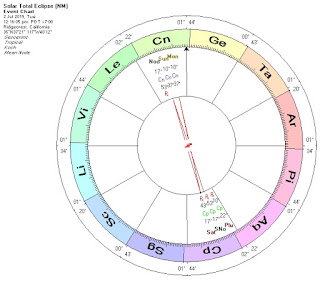 The Total Solar Eclipse of July 2 fell close to the meridian axis in Southern California so that it is the primary cause for the  quakes in that area.  The power and intensity of the quake can be linked to the conjunction of Saturn-Pluto in the 4th house opposite the eclipse. 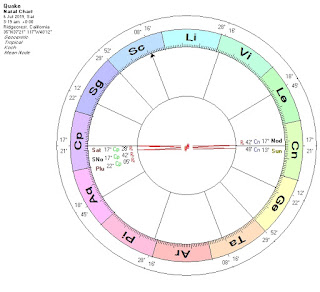 Notice that the chart for the exact time of the Ridgecrest quake (6th June 19; 3:20 UT) has the Saturn-Pluto opposition to the Sun aligned with the horizon identifying it as the primary cause.