On the morning of 14 September, 18 drones and seven cruise missiles – all cheap and unsophisticated compared to modern military aircraft – disabled half of Saudi Arabia’s crude oil production and raised the world price of oil by 20 per cent. This happened despite the Saudis spending $67.6bn (£54bn) on their defence budget last year, much of it on vastly expensive aircraft and air defence systems, which notably failed to stop the attack. The US defence budget stands at $750bn (£600.2bn), and its intelligence budget at $85bn (£68bn), but the US forces in the Gulf did not know what was happening until it was all over. https://www.zerohedge.com/geopolitical/saudi-arabia-drone-attacks-have-changed-global-warfare 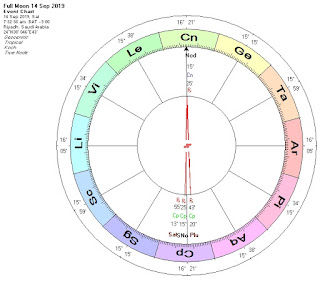 The monthly rhythm of the Lunation Cycle (the cycle of relationship between the Sun and the Moon) is perhaps the most important planetary cycle. Astrologers routinely draw the charts for the New Moon and the Full Moon to understand the hidden messages. As always planetary configurations brought to the angles (horizon or meridian) are the ones to focus on. Here is the chart for the Sep. 14 Full Moon drawn for Riyadh. Notice the Saturn-Pluto-Nodal axis aligned with the meridian. In a previous blogpost [1] on the Saudi attack we looked at the Capricorn Ingress chart which also had the same combination aligned with the meridian (coincidence?).

So what does this combination mean? Steven Forrest explains:

The South node always suggests karma ripening. Pluto always brings truth to the surface, especially the kinds of realizations that we tend not to welcome. Saturn, as we saw, can also be confrontational: bills come due, hard choices must be made, push comes to shove. It is impossible, in other words, to look at this astrologically without recognizing that both individually and collectively, the karmic chickens are coming home to roost.

Pluto, as Lord of the underworld, always brings shadow material to the surface. As it passes through a sign, the darker dimensions of that sign loom large in the collective experience .Dark Capricorn can be frightening. It invokes the image of the controlling tyrant suppressing truth and murdering enemies, real or perceived. Ultimately, it is not even really about a political ideology. Ultimately it is about fear: the fear of losing control or power, the fear of change, the fear of anything or anyone perceived as alien, and fear of the unknowable future. Add In The South Node. The South node of the Moon, like Pluto, brings wounded material to the surface. The combination of the two symbols suggests that the “boil” of the fear-driven side of conservatism is currently bursting. Everything truly terrifying about it is being laid on the table of collective consciousness.[2]